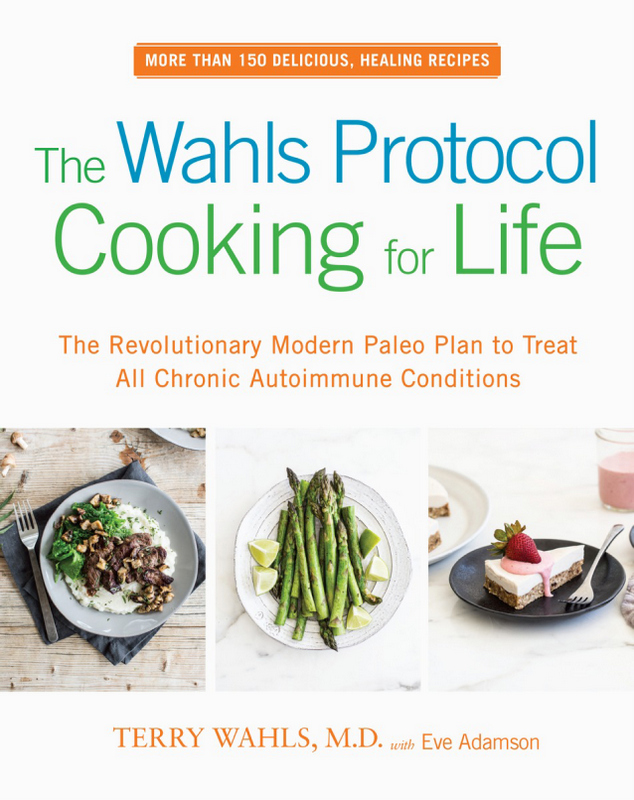 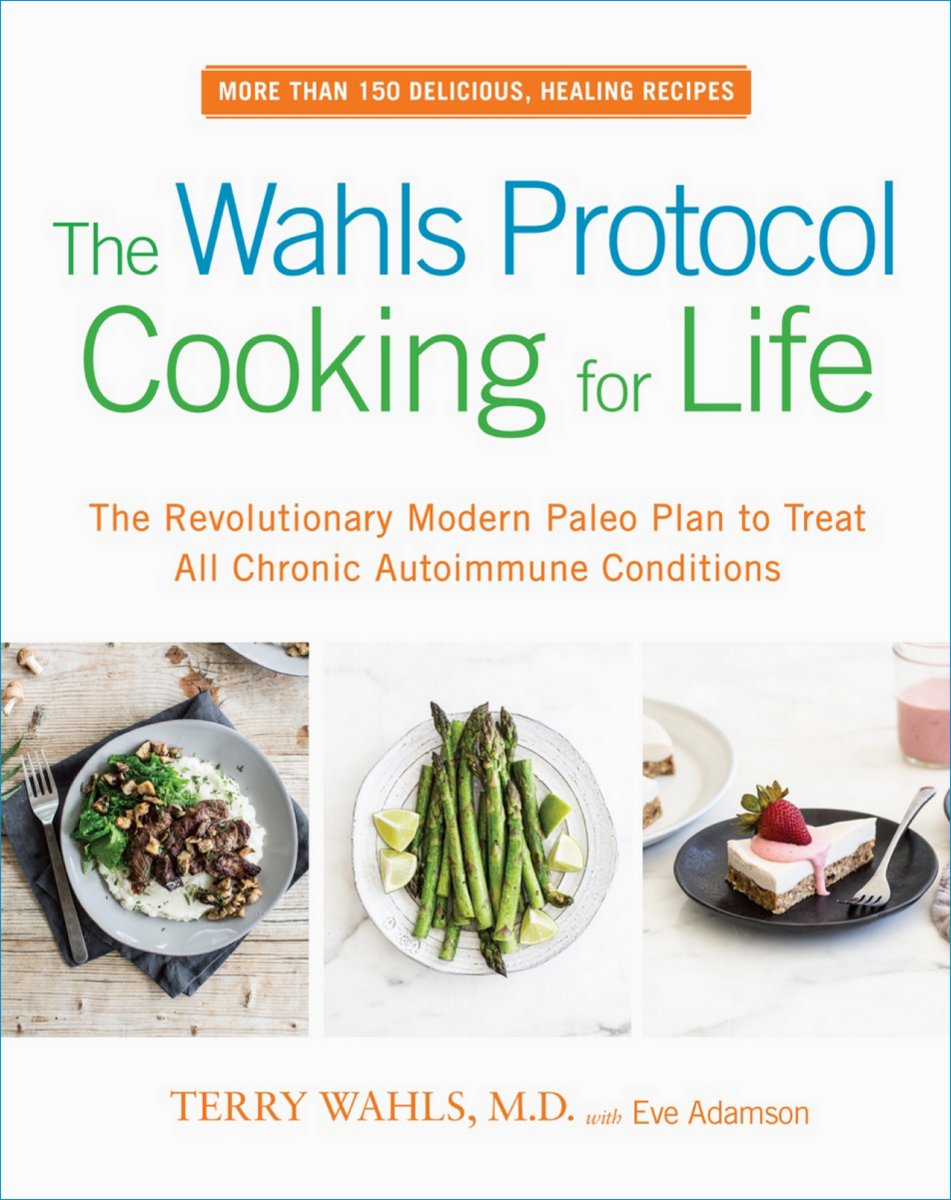 “What we eat and how we live sends a direct message to our bodies about how to respond:
with vitality, or with decline.”
~ Terry Wahls

The Resource the Wahls Warrior Community Has Been Waiting For

Terry Wahls was diagnosed with multiple sclerosis in the year 2000. In spite of taking the best medicine available, her disease progressed rapidly, and within 3 years she was dependent upon a tilt-recline wheelchair. In desperation, she began scouring the scientific literature for nutritional interventions. Her research led her to develop the Wahls Protocol, a diet and lifestyle program that not only stopped her progression but reversed many of her symptoms, allowing her to leave her wheelchair behind and start bicycling again. She published her first book, Minding My Mitochondria, in 2010. She then shared her success story in her famous TED Talk in 2011, which has now been viewed on Youtube over 2.5 million times. In 2014 she published The Wahls Protocol. Now, in 2017, we are celebrating the release of its companion cookbook: Wahls Protocol Cooking for Life.

What You Can Expect From This Cookbook

The Paleo Autoimmune Protocol (AIP) and The Wahls Protocol have a lot in common, but they are not the same thing. They both focus on food as medicine for people with autoimmune disease. They both have a paleo foundation and a focus on nutrient-density.  They are both egg-free and dairy-free (except the Wahls Protocol allows ghee.) But the AIP is also an elimination diet, whereas the Wahls Protocol is not. That means Wahls recipes will often include ingredients not allowed on the elimination phase of the AIP, such as nuts, seeds and nightshades. Of the 175 recipes in this cookbook, about 90 are easily adapted to the AIP.  If you have successfully reintroduced nuts and seeds, that opens up many more recipes in the cookbook. The book also includes a nightshade replacement guide with suggested substitutions of tomatoes, potatoes, peppers and eggplant, along with recipes for nightshade-free salsa, gazpacho, and a tomato-free red sauce.

Another big difference between the Wahls Protocol and the AIP is their stand on smoothies. This cookbook has a large smoothie section, because Terry herself usually has a smoothie for breakfast. She considers it a great way to easily increase your vegetable intake and also eat in a hurry. She’s also aware that some people with multiple sclerosis get chewing fatigue, and smoothies make it easier to eat the recommended 6-9 cups of vegetables daily. By contrast, The Paleo Approach (aka the AIP bible), recommends against “drinking our food” due to the blood sugar surges that can result, and also because chewing stimulates the digestive process for optimal absorption of nutrients. The AIP recommendation is to drink your smoothie alongside a meal.

What’s your favorite recipe in the book?

It is impossible to pick just one. There are so many wonderful recipes to help you take your health back, and I love them all. I want people to realize how easy it is to make delicious food. You can use a crockpot and make delicious bone broth. The bone broth can then be mixed with fresh herbs, spices, and coconut milk to make a variety of lovely soups. The skillet meals can be prepared in less than 30 minutes, which is very helpful for those who are working full time. I enjoy fermented foods and am currently very fond of coconut milk kefir and coconut milk yogurt. Greens and coconut milk smoothies are a big staple as well.

What are your family’s favorite recipes?

Our family’s favorite dish is bacon and greens. We have several special treats, including bacon-wrapped Brussels sprouts and bacon-wrapped dates. My daughter has become quite proficient at cooking liver and making liver paté with the leftovers. Our favorite meals, however, are the skillet meals. Variations of skillet meals are what we do most nights after work. Our favorite family treat recipe is Wahls Fudge. We serve it with chamomile tea and coconut milk to top our holiday meals and when friends come over. It really can’t be beat!

You are passionate about teaching children how to cook. Why do you think this important?

Children are our future. We have increased rates of obesity, mental health issues, and autoimmune problems. These diseases are a result of diet and lifestyle choices. The most powerful of those two is diet. Families are pressed for time and often choose to eat fast food. If they cook at home, people often use pre-packaged mixes instead of recipes. Too many of our children do not know how to complete simple adult tasks, such as preparing home-cooked meals. Eating as a family and showing our children how to cook is associated with improved social skills, better behavior, better grades, and better health. If your children can operate a video game controller, then they can help set the table and prepare a meal. They will be healthier children and healthier adults as a result. Give kids a task that they don’t have to do perfectly. At the age of 5 or 6, they can begin helping with setting and clearing the table. They can also help with planning the menu, washing the vegetables, and stirring. As they get more coordinated they can help with measuring, peeling, grating, and chopping. Praise their effort. If you can, get them involved in growing some food. They will enjoy the chance to be outside, which will increase their vitamin D from the sunlight exposure, and in the dirt, which will add more diversity to their microbiome.

You are also passionate about food waste, from both an ecological and nutritional perspective. Please tell us more, including the unusual parts of fruits and vegetables you include in some of your recipes.

We often throw away leaves and core of vegetables, but these parts are usually quite edible and when properly prepared, quite tasty. Many of us enjoy radishes. What people often don’t realize is that the greens are edible and quite delicious. Root vegetables also usually have delicious and edible greens. I like to sauté radish greens in bacon fat with chopped radishes. It’s delicious. The entire cauliflower, including the core, can be grated to make a delicious rice-like dish that can be served with a tasty sauce.

Are you planning a book signing tour?

Yes. I’ll be talking about my research, the links between teaching our children how to cook and their current and future health, and the need for us to all get back to our kitchens, preparing home-cooked meals as we usher in the epidemic of health. Here’s my book tour schedule. Come join me if you are in the area. 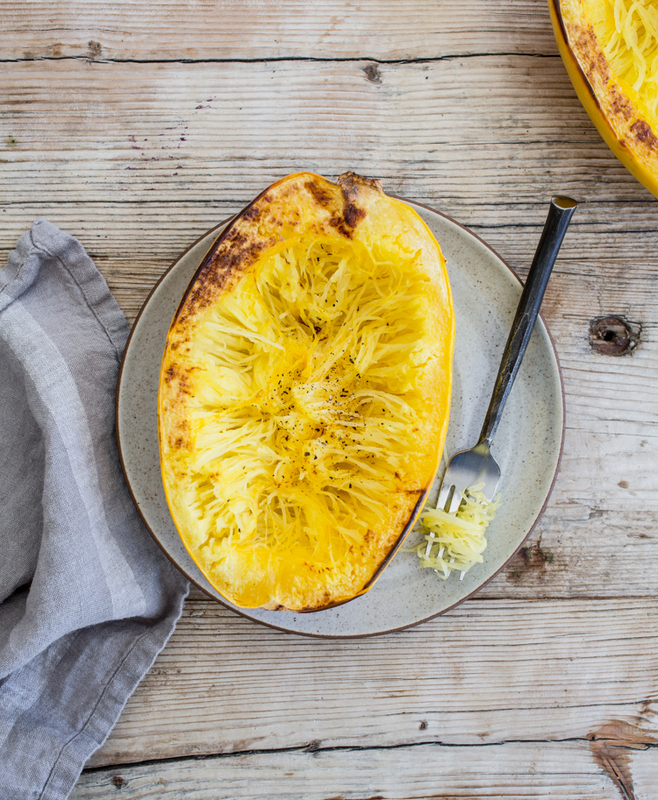 For grain-free eaters who miss pasta, one solution is spaghetti squash, a delicious and curiously pasta-liken vegetable that you can top with all kinds of delicious sauces. Making it is simple if you use your slow cooker. The advantage to this is that you don’t have to wrestle with trying to cut the squash in half. Just plop the whole thing in the slow cooker and when it’s done, your knife cuts through it like butter. You can use your slow cooker to prepare all winter squash, such as butternut, acorn, and delicata.

Update: A giveaway was held to celebrate the publication of this book, and the winner was chosen with a random number generator. Congratulations to Krista! If you didn’t win, don’t despair. The book is for sale in the USA through Amazon.com and internationally through the Book Depository.